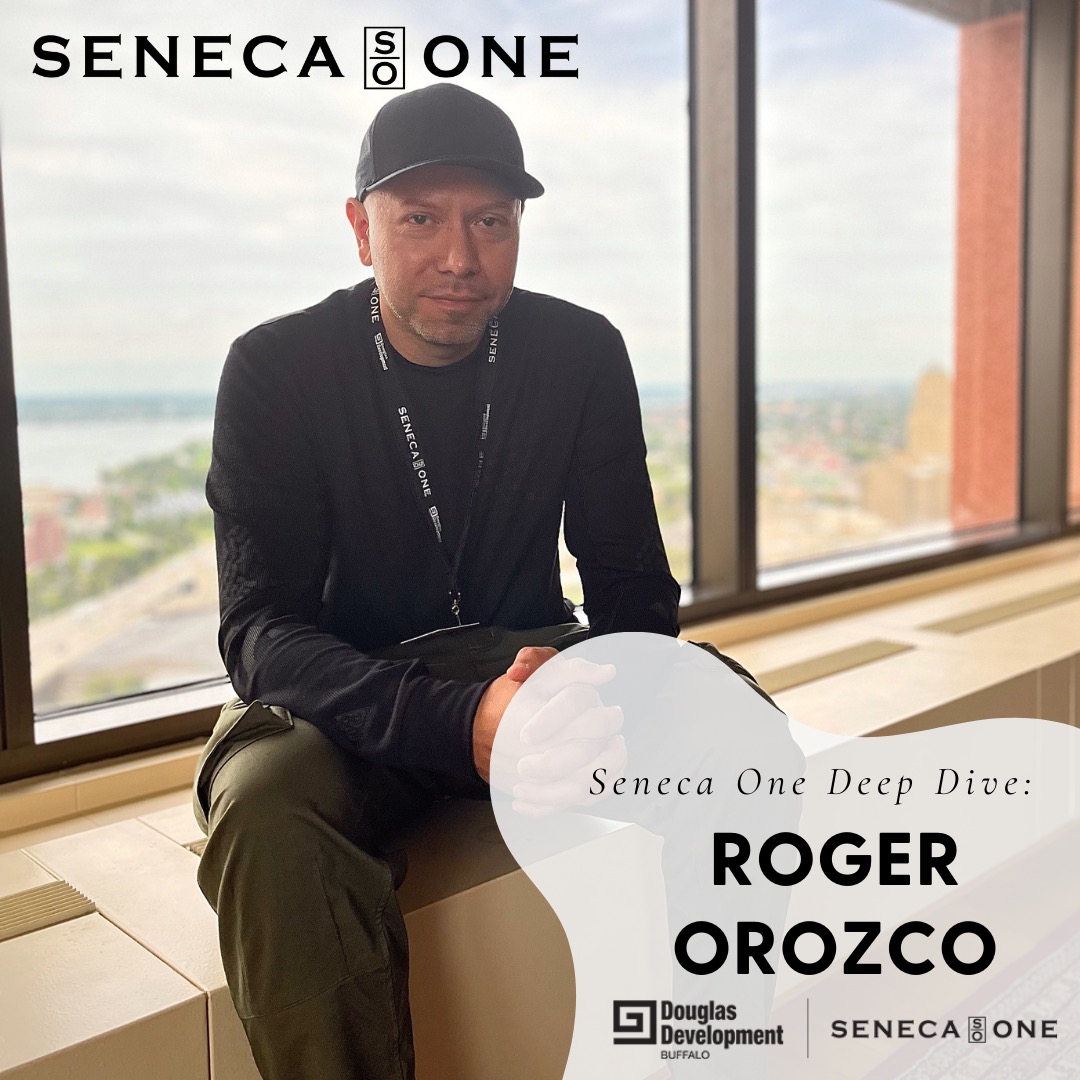 Welcome to the Seneca One Deep Dive! The team at Seneca One identifies exciting up-and-coming people, projects, and companies to dive into and share with our audiences. This week we’re swimming to shore with Roger Orozco, Facilities Manager of All Pro Parking LLC.

BUFFALO, NY: It’s a warm summer Friday night at Seneca One, and Roger Orozco is manning the grill.

Through the haze of smoke and the delicious smell of smoked meat is a sea of Buffalonians ready to feast on some Sahlen’s hot dogs after a night at the Buffalo Bisons’ game.

“I GOT TWO READY TO GO,” Orozco says, as a man and his young child approach the table to collect their free hot dogs. The process goes round and round for a few hours until everyone is fed. By the end of the night, Orozco has served 250 hot dogs to over 200 people, with a giant smile on his face.

Orozco is the Facilities Manager for All Pro Parking LLC for Seneca One, Larkinville, and the Buffalo Grand Hotel. He is also on the Buffalo Bills Committee. He wears many hats, and when he isn’t cooking hot dogs for the “City of Good Neighbors,” trying to keep folding tables on all fours at Bill tailgates, he’s helping the tenants and residents of Seneca One and the greater WNY community navigate their way through downtown Buffalo, something he takes great pride in.

“It’s the people at Seneca One that make it my special and favorite place,” Orozco said. “It’s cool to say that I work at the “red building.” Also, the vibe at Seneca One is a fascinating anomaly.”

Since taking over as Facilities Manager in 2014, Orozco has gone above and beyond to provide a positive atmosphere and exceptional hospitality to those of Seneca One. It doesn’t matter to him if the task at hand falls in line with his job description, he’s a team player with the same shared vision as the rest of the team here at Seneca One, and that is to maintain a high quality of life.

Need directions to the best restaurant in town? Roger has a list memorized and has no problem telling you what to order when you arrive. Need a pick-me-up or a motivational quote for the day? Roger is your hype man and always has some type of quote to lift you up on those days you might be feeling down.

He loves his job. He loves the people of Buffalo. He wants to see this city get back to its glory days, and as the Facilities Manager, he’s the first impression someone has of the Seneca One Community when they arrive. He’s like a public relations representative for the community of Buffalo.

“As a Buffalonian, it’s amazing to see the transformation of downtown Buffalo,” Orozco said. “From Canalside, Larkinville, Seneca One, all the family-owned pubs, and restaurants, we have a lot of hidden gems in our city. Buffalo is one of the countries best kept secrets.”

So, when you arrive at Seneca One for your next tour, event or just to check out the future of Buffalo, look for Roger and ask him about the building. You will understand just how much this city means to him. 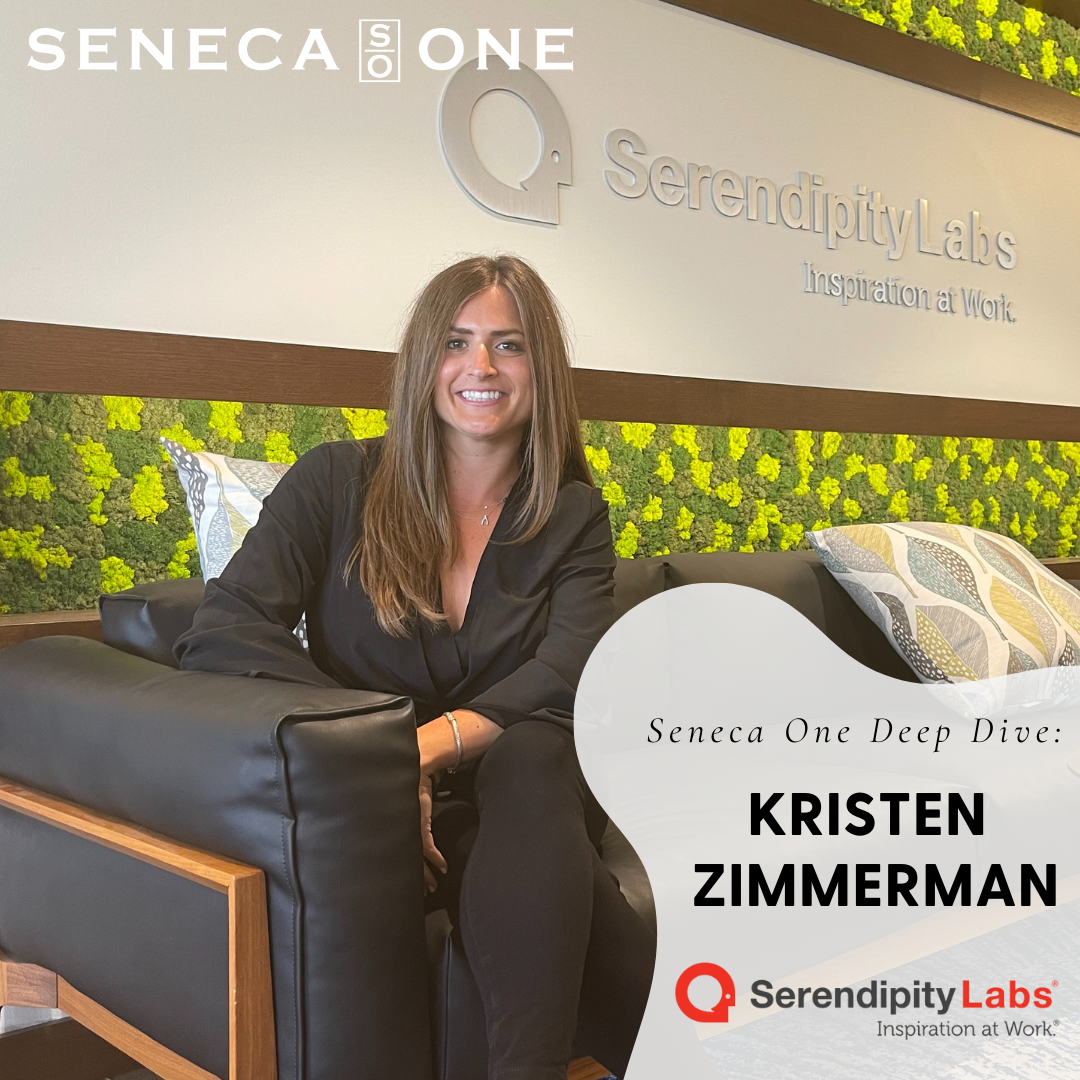 Welcome to this week’s Seneca One Deep Dive! The team at Seneca One identifies exciting up-and-coming people, projects, and companies to dive into and share with our audiences. This week we’re setting sail with Kristen Zimmerman, General Manager of Serendipity Labs.

Embedded in the DNA of the Seneca One community, high up on the 29th floor, is an oasis filled with businesses striving to grow and thrive at the brand new tech hub in downtown Buffalo.

On any given day, when you arrive on the floor, you see many faces. You see different people walking with a purpose, ready to attack the day with enthusiasm and poise.

But one thing that stands out among other things is a smiling face that greets you and is ready, willing, and able to do everything she can to make your stay at Seneca One the best it can be.

Kristen Zimmerman is the General Manager of Serendipity Labs, a coworking and flexible office space that is home to many startups, and small to medium-sized businesses here at Seneca One, and since February, Zimmerman has watched Seneca One transform and come alive with a new hustle and bustle.

“I was living in NYC and when I heard about the exciting things going on in Buffalo and Seneca One,” Zimmerman said. “I knew I wanted to be a part of it. The opportunity to run a coworking and flexible office space became an option and I knew there was no better way to move back and be involved in the community than this.”

Serendipity Labs was founded in 2011 with the idea to create professional workspaces with the flexibility businesses need today, all supported by on-site hospitality teams. They have 30-plus locations nationwide and on March 1, the coworking shared space found a nice spot on the 29th floor of Buffalo’s tallest skyscraper.

With all of the talk of large tech companies here at Seneca One, the flexible space is gaining traction and becoming popular among smaller businesses. It allows them the opportunity to grow as the once sleeping giant continues to ignite a Buffalo renaissance.

“Meeting new people and creating an environment where members find it enjoyable to come into work,” Zimmerman said. “The building may be known as a tech hub but it truly is an option for all companies small or large.”

Serendipity Labs offers monthly and daily access to Private Offices and a customizable suite for 1-50 employees, hybrid work styles with coworking plans, and Worktopia™  memberships for access across their network. They also offer Meeting Rooms, board rooms for up to 12, and collaboration space for up to 40 attendees in every location.

So, the next time you’re at Seneca One for a tour, a cocktail at our lobby bar, or just popping in to say “Hello”, ask for Kristen. She is always happy to talk about Serendipity Labs. Just be sure to greet the true Buffalonian with a “Go Bills!”