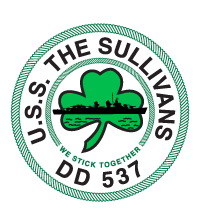 Press or Donation Contact: Sean Heidinger at sheidinger@douglasdev.com or 716-207-8908

BUFFALO, NY – In collaboration with Douglas Jemal, the Buffalo and Erie County Naval & Military Park has officially launched the largest fundraising campaign in the 40 year history of the Park. With a goal of $1,000,000, Save The Sullivans is set to raise the money needed to make permanent repairs to the hull of the USS The Sullivans.

USS The Sullivans (DD-537) a 78-year old Fletcher-Class destroyer that saw action in World War II, the Korean War, and the Cold War is a major attraction at The Buffalo and Erie County Naval & Military Park. USS The Sullivans is named in honor of the five Sullivan brothers who, serving together on the light cruiser USS Juneau, were all killed in action on its sinking around November 13, 1942. The ship was christened by the fallen brothers’ mother, Alleta Sullivan, and is a National Historic Landmark. It holds a special place in our nation’s military history and a special place on the Buffalo Waterfront.

“Decades of harsh weather in Buffalo have taken a toll on the ship. The severely weakened hull was recently compromised below the waterline and the ship began taking on water.” commented Paul Marzello, president and CEO for the Buffalo Naval Park. “A full bow-to-stern survey of the ship’s hull was conducted and an engineered plan developed for the necessary repairs. It involves applying a two-part epoxy coating to the entire hull below the waterline and the installation of a cathodic protection system that will prevent further corrosion of the USS The Sullivans, the USS Little Rock and the USS Croaker.”

Douglas Jemal of Douglas Development has volunteered to act as campaign captain of Save the Sullivans. “It is an honor for me to be a part of the effort to preserve this ship and honor the service and sacrifice of the Sullivan brothers.” commented Jemal.

The official launch of the Save the Sullivans campaign will be marked by a private fundraiser hosted by Jemal on St. Patrick’s Day at the Naval Park. The invitation-only event will be the first major push toward raising the $1,000,000.

Sullivan’s Brewing is also jumping on-board the campaign effort. Michael Meade, a Buffalo native and CEO of the Kilkenney, Ireland based brewery, was instrumental in bringing Sullivan’s to North America and launching in Buffalo a few years ago. “Buffalo is a second home for Sullivan’s. When we heard about the need to save the USS The Sullivans, it was a natural for us to get involved and help.” commented Meade. A team from Sullivan’s including brand ambassador and voice of the Buffalo Bills John Murphy will be on hand at the Jemal fundraiser pouring Sullivan’s for guests.

Calling all Sullivans. In an effort to draw in more participation to the Save The Sullivans campaign, the Naval Park is asking all people with the last name Sullivan to contribute to the effort by making a $5.00 donation.

Contributions to the Save the Sullivans campaign can be made securely online at SAVETHESULLIVANS.ORG or by mailing to Buffalo and Erie County Naval & Military Park, ATTN: Save the Sullivans, One Naval Cove, Buffalo, New York, 14202, or by calling the park directly at 716-847-1773, EXT 10.

For three decades, Douglas Development Corporation has garnered redevelopment successes in the District of Columbia, as well as in suburban Virginia and Maryland. Douglas Development has earned a reputation for revitalizing underdeveloped, emerging areas and continues to win praise from local government authorities, community members, neighbors, and the real estate community at large.

Founder and President Douglas Jemal established Douglas Development in 1985. While the company remains a privately operated and family-owned and controlled company, it has since grown into a fully integrated real estate company with over 100 employees, expanding to New York, New Jersey and Pennsylvania.

With a current portfolio of more than 14 million leasable square feet and more than 5 million square feet of developable real estate in the pipeline, Douglas Development is well-established as one of the most dominant and successful real estate developers in the Washington Metropolitan area. Learn more at www.douglasdevelopment.com.

About the Buffalo and Erie County Military & Naval Park

In 1976, the Buffalo Urban Renewal Agency and a group of community supporters gathered together to create a non-profit organization in order to submit a request to the U.S. Navy for a decommissioned naval vessel as part of a waterfront development plan.

The Navy granted their request, and in 1977, donated a destroyer and a guided missile cruiser to the City of Buffalo. After two years of fundraising and restoration, the newly formed organization opened to the public on July 4, 1979. In subsequent years The Park has added substantially to its collection of military artifacts.

The Park is the largest inland naval park in the country. Western New York is home to one of the largest concentrations of military veterans in the United States making The Park a popular attraction as well as a center of pride with this stakeholder group.